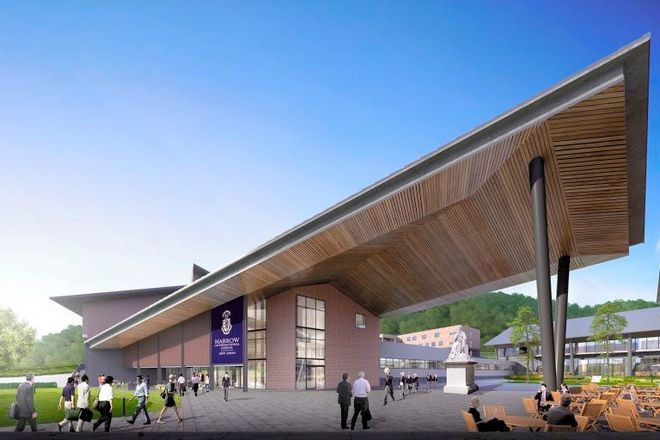 Situated on the Appi Plateau in Hachimantai, Iwate Prefecture, which is less than an hour drive from Morioka, the school is planning to start operations in August with its building almost completed.

Under the plan, some 70 staff members will handle 200 students ranging in age from 11 to 18 in the initial phase.

In addition to life support being provided for children, such as controlling their use of smartphones, special sports including skiing and golfing and art lessons will be offered.

International education institutes such as Harrow Appi are opening schools in Japan, targeting not only offspring of diplomats and foreign companies’ employees but also local children.

Amid the growing demand for quality teaching among wealthy individuals, prestigious British establishments are planning to install their affiliated academies across Japan this year and next year.

Harrow Appi will be the first Japanese establishment introduced by the school’s operator based in suburban London after its counterparts in major cities in Thailand and China.

Harrow School was started in 1572 and is well known as one of the nine independent elite schools in Britain. Former British Prime Minister Winston Churchill and India’s first prime minister, Jawaharlal Nehru, are famously among its graduates.

The tuition fee, combined with the boarding charge, will total more than 8 million yen ($69,000) annually, compared with the average educational cost of a total of 4.6 million yen for six-year courses at private junior and senior high schools in Tokyo.

Despite the expensive fee, many Japanese parents are expected to attend explanatory sessions to be organized in February and March in Tokyo and Osaka Prefecture.

According to the accounts of Michael Farley, the envisioned head of Harrow Appi, provided during an online Asahi Shimbun interview in early February, half to two-thirds of the first students will be Japanese children.

Asked about the tuition fee, Farley described his school’s cost as reasonable, referring to the far more expensive charge of a Swiss boarding school.

Farley said the mission of Harrow Appi is nurturing leaders who will serve as top elites in the world, and establishments of that kind are needed in Japan these days.

Rugby School, which is also one of the nine schools like Harrow School, is moving to open an affiliated institution within Chiba University’s campus in Kashiwa, Chiba Prefecture, in September next year. It will be the operator’s second overseas branch following one in Bangkok.

Having a history of 150 years, prestigious Malvern College alike announced a plan in January this year to start operations of its group establishment in Tokyo’s Kodaira in September 2023.

Explaining why a succession of prominent British school operators are looking to expand into Japan, Manabu Murata, who calls himself an international education commentator, pointed to the increasing demand for foreign language instruction.

According to Murata, many institutes offering preschool English language programs for small kids were started during the 2000s and afterward throughout Japan.

Parents who want their children to continue studying English are choosing international schools as options. The students are expected to attend top universities outside Japan after graduation.

The elite schools in Britain are attempting to cash in on the growing need for their programs mainly among wealthy individuals in the emerging market as part of efforts to bolster global expansion.

As hosting international schools is likewise beneficial for overseas nationals working at foreign-affiliated financial companies and elsewhere in Japan, Murata stated the current tendency is “in line with the government’s policy of luring people with advanced specialization from overseas.”

Hakuba International School will open in Hakuba, Nagano Prefecture, in September this year for children of junior and senior high school age.

Those educational facilities are typically characterized by dormitories and English language lessons.

“The prestigious British schools target primarily wealthier people in Asia, though it is still difficult due to the novel coronavirus crisis to predict future trends,” said Murata. “There is potential demand in Japan for higher quality educational courses and international schools will further increase their presence from now.”

Please confirm you want to block this member.

You will no longer be able to:

Please allow a few minutes for this process to complete.

You have already reported this